Riverside is the leading facility for Guitar Lessons in Glasgow. 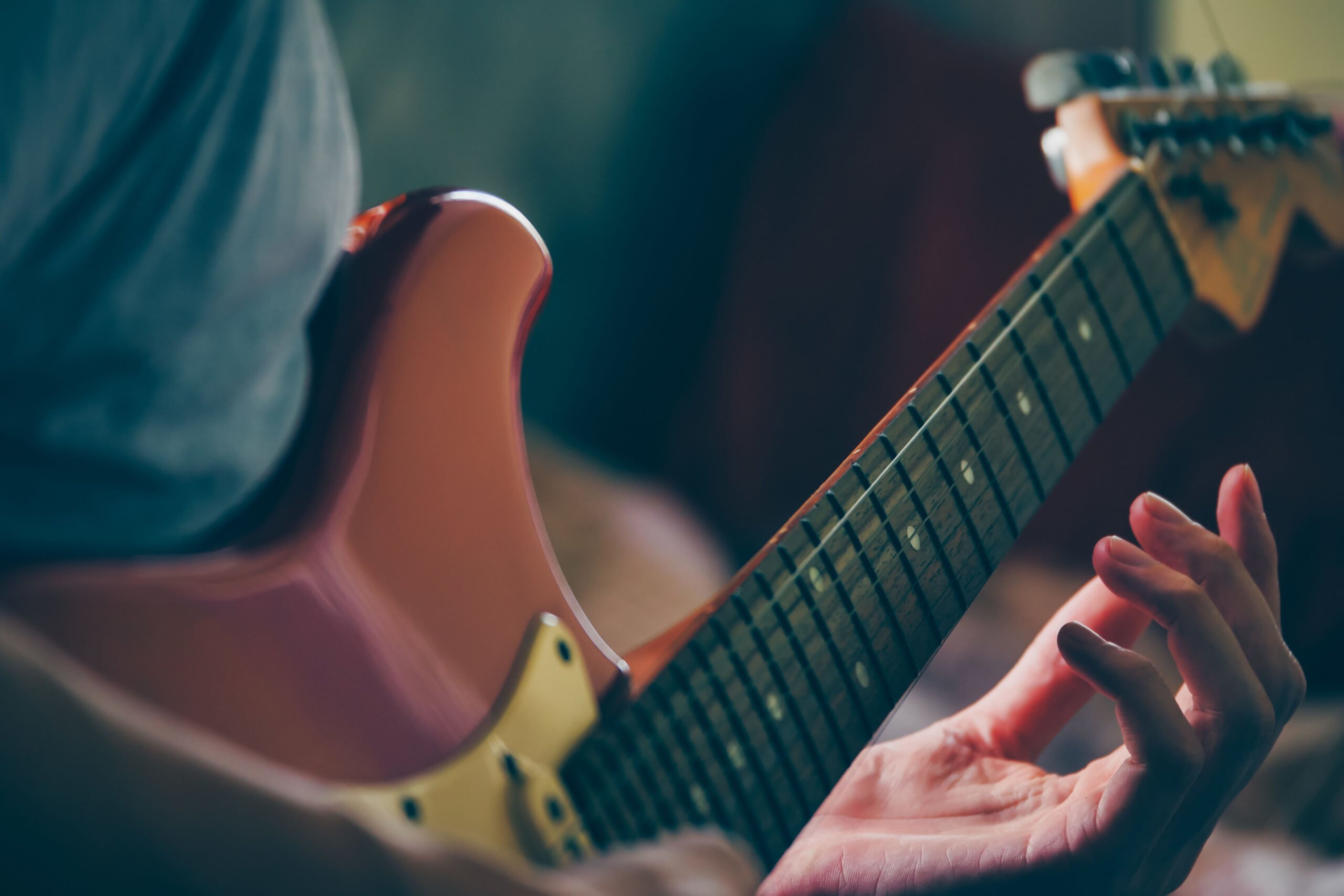 Guitar tuition for all ages and experience levels. If you are a looking to learn the basics, work on more advanced techniques, or you’re just trying something new, then we can provide one to one tuition designed for you. We have a range of experienced tutors who will tailor your lessons to the music you enjoy, and help you progress and develop new skills.

“Whether you are interested in guitar lessons for beginners, group classes or just want to brush up on your skills then get in touch and we will be happy to organise a time to suit you.”

Our Senior Guitar Tutor, Jamie, has had years of experience as a professional guitarist in the music industry with session guitar credits including; BMX Bandits, Nice Man and the Bad Boys (Francis MacDonald of Teenage Fanclub), The Telescopes, Damo Suzuki, and Ed Temple Tudor.

He has also toured supporting and playing with artists such as The Vaselines, Mudhoney, and Lou Barlow (of Sebadon and Dinosaur Jnr).

In between teaching as a Senior Lecturer on our HND Music Performance Course and Private Guitar lessons, Jamie has played throughout Glasgow also toured the world with various bands, and in more recent years with his own band, St Deluxe – who have recorded and produced their previous albums in-house at Riverside.

He has also worked with Calvin Johnson (Musician and founder of K Records), Stuart Braithwaite (Mogwai) and has performed as part of BBC Radio 6 Live, Session Scotland, and John Peel Sessions. On top of this, he has also had experience running a small Vinyl Record Label.

Jamie has a wealth of knowledge and skills in a range of styles on acoustic and electric including: rock, blues, jazz, funk, reggae, punk, metal, contemporary, finger-picking, classical and traditional.

Calum has been part of the Riverside Private Tuition team teaching Guitar and Bass for over 6 years now and also Teaches First Instrument Study on our HND Music Performance Course.

He is a multi-Instrumentalist with years of experience under his belt, having picked up his love for learning to play music at the tender age of just 10, Calum is a well versed and accomplished Musician amassing 15 years of playing experience both in a live and studio environment. Priding himself on his versatility, Calum has vast experience playing a multitude of genres covering styles such as Metal to Country and everything in between.

He currently plays Guitar in Glasgow based band Dead Coyotes and is regularly gigging, recording and playing for live radio sessions. As well as being an accomplished musician, Calum is also a qualified Sound Engineer coming through our ‘HND Sound Production’ here at Riverside Music College.

Kevin’s musical career spans across different genres having played in numerous Rock, Metal, Samba and Jazz bands, as well as performing in Orchestras.

At age 17 Kevin had already achieved both Guitar and Drums at Grade 8 level. He then later studied at Riverside Music College in Guitar and Composition, while taking a year in between to professionally study Sound Engineering before completing his Diploma.

He has been formally teaching guitar for over 10 years and has a wealth of different teaching methods to suit individual needs. Kevin prides himself on being able to make even the trickiest endeavours easy to understand and learn. After all, everyone learns in different ways. He also lectures Live Performance Skills and Music Theory on the HND Music Performance courses.

Aside from teaching, Kevin also composes music for media such as TV, Films and Games and has wrote, arranged, organised and produced music projects on a global scale for ensembles with 80+ musicians involved and has worked with world-wide renowned artists such as Donna Burke.

His work can be heard throughout numerous films, games and other projects and has also amassed over 2 million streams of his music alone.

After attending Riverside and achieving his HND Music Performance, Michael started as part of the Private Tuition Staff at the college.

In between working at Riverside – you can find him playing all round Glasgow and Edinburgh, with his band The Rhubarb, where they have played The Garage, Nice ’N’ Sleazy’s, Stereo, Opium (Edinburgh). Michael can also seen and heard writing, producing, or recording songs with Wildfire Sessions, who have been working along side The Gladiator Film Company, producing music for films like “Quel che non ti dirò mai” which was featured in the Cardiff International Film Festival 2017, and the Savigliano Film Festival where it won best trailer, featuring the Wildfire Sessions Single “Call When I Get There”.

Michael’s open and detailed approach to lessons provides a unique and fun experience for all ages and playing abilities of students.

Sam has been teaching guitar and bass at Riverside since March 2017. He has attained both, HND Sound Production and HND Music Performance from the college itself.

After spending 5-10 years in a variety of bands from Metal/Hard Rock to Pop and various Ambient projects, Sam decided to focus on engineering and recording musicians, trying to get the best performance possible. Taking this focus on performance and musical ability, Sam can work with students to reach their goals, whether it be understanding Music Theory, attaining Trinity Grade Exams or growth of playing style, creativity and technicality. As well as his one-to-one lessons, Sam also Engineers and mixes various Artists, Bands and Projects in our Studio.