Want to learn how to play the Drums? Here at Riverside we have the perfect environment to make it happen. 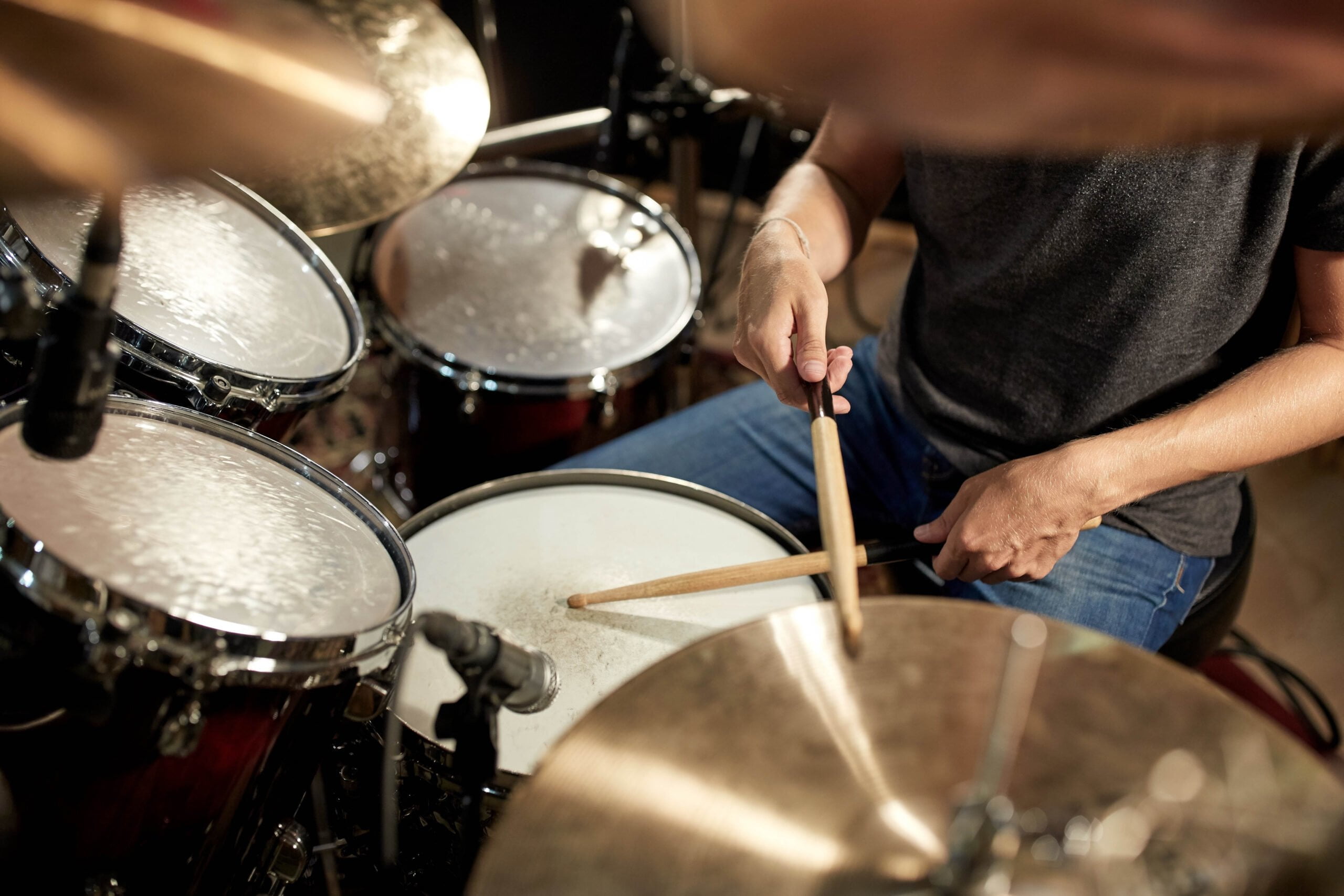 Would you like to learn the drums, or improve your skills? We provide one to one drum lessons for all ages and experience levels. Our tutors are experts in a range of styles, and our one to one tuition is designed to focus on learning at your own pace. It can be a challenge to practice drums at home, so come and take advantage of our sound proofed practice rooms and make as much noise as you like!

We are a registered Exam Centre for Trinity College London, so whether you would like to work towards grades or learn for fun, we can help with both.

Our plush music college is convenient for budding drummers in Glasgow, East Kilbride and the surrounding areas and is well served by Busby’s excellent transport links. We provide the very best environment for learning to play or improving your drumming technique.

Ross is our Head Drum Tutor here at Riverside, he began playing drums from the age of ten and thrives on passing on his knowledge in private lessons.

As well as an exceptional drummer, Ross is a qualified Sound Engineer and Lectures on both the Music Performance and Sound Production HND’s as part of Riverside’s educational programmes.  He also plays drums with his brother, Jamie, in St Deluxe as well as recording, engineering, co-producing and mixing their albums, along with Engineering other recording projects for various artists in our Recording Studios.

He has also worked with and collaborated with various artists – and toured internationally – playing festivals, live radio sessions and venues throughout Glasgow, Europe and the rest of the world.

Owen has been a drum tutor at Riverside for over 3 years and started teaching after gaining an HND in Music Performance at the College.

With around 20 years of drumming experience, Owen has been a regular fixture on the Scottish music scene playing with a great number of bands and musicians as a full time band member and as a session musician.

Owen has drummed on albums and sessions in many different situations from commercial recording studios to DIY home set ups and is credited on LPs and CDs released by independent record labels such as Tin Angel, Song by Toad, Lost Map and Fence. Owen has also appeared on Live Radio Sessions for Marc Riley Show (BBC 6 Music) and Vic Galloway (BBC Radio Scotland).

In addition, Owen has performed live film soundtracks at Glasgow Film Festival and in various live art performance pieces in spaces such as galleries, indoor climbing arenas, caves and velodromes

Owens sought after drumming style is musical, open and creative, with a keen attention to detail. He greatly enjoys sharing his knowledge and skills with the next generation of drummers.

Stephen is a drummer and percussionist who has played in various bands in and around the Glasgow area over the past 6 years and gigs regularly with Dead Coyotes, Craig Borland and Beggar In The Heights as well as working in various covers bands and one-off projects. He began playing drums when he was 15 and was self-taught until 2016 when he began taking lessons from Gordon Wilson. Stephen has been teaching drums for around a year now and is loving every minute of it!

Stephen also studied Sound Production at Riverside Music College from 2014 to 2017 which gave him even more first-hand knowledge of working in a studio.

Being so active in the Glasgow music scene for the past few years has given Stephen a lot of hands on experience in the studio and at live shows, as well as a working knowledge of various styles of music including Blues, Hard Rock, Rock ‘n’ Roll, Grunge and Ambient music.

Niall has been working in music for the past seven years across a variety of music making and teaching. Studying piano in Aberdeen from a young age, he quickly fell in love with classical, jazz and popular music. Alongside this he discovered percussion and drums. Having been fully involved in the youth ensembles Aberdeen Music Centre had to offer, he also got to work with vocalists and instrumentalists providing accompaniment for exams and concerts.